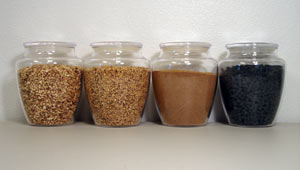 Larviciding is the process of controlling mosquitoes when they are in the larval or pupal form. Controlling mosquitoes when they are in the water is an effective approach because the mosquito is somewhat isolated and known breeding sites can be recorded and routinely monitored. For many Districts, this is the bulk of their operations. There are a number of different products available for abatement practices. Often times, one product will be better suited for a particular situation than another product.

Bacillus sphaericus works very similar to Bti. Mosquito larvae of susceptible species ingest a lethal dose of B. sphaericus crystals and spores. Toxins are released in the larval midgut, paralyzing and damaging the digestive system. The larvae undergo tremors, become sluggish and die with 48 hours.

Bacillus thuringiensis israelensis (Bti) is a microbe used in controlling mosquito larvae. Mosquito larvae of susceptible species ingest a lethal dose of Bti crystals and spores. Toxins are activated in the larval midgut, paralyzing and damaging the digestive system. Larvae become sluggish and die within 24 hours.

Larviciding oils are petroleum hydrocarbons that act as surfactants to prevent larvae and pupae from breaking through the water’s surface tension and blocks their breathing tubes so that they eventually drown. It can also make surface attachment more difficult.

Methoprene is an insect growth regulator (IGR) that interferes with normal mosquito development. Methoprene is absorbed through the skin of the larvae and dis 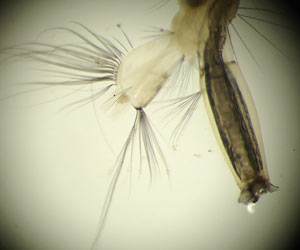 rupts the normal development cycle resulting in the inability to complete metamorphosis.

A Monomolecular Film (MMF) is made up of a special alcohol ethoxylate that has the tendency to spread rapidly over the surface of water. The ethoxylate is a surfactant that reduces the surface tension of the water and makes it difficult for the larvae and pupae to attach. Larvae and pupae need to be able to attach to the surface in order to breathe, this process slowly fatigues them until the point that they drown.

Spinosad is a natural substance made by a soil bacterium that can be toxic to insects. It is a mixture of two chemicals called spinosyn A and spinosyn D. It is used to control a wide variety of pests.  Discovered in an abandoned Caribbean rum distillery in 1982, the parent bacterium was later fermented and found to have insecticidal qualities.